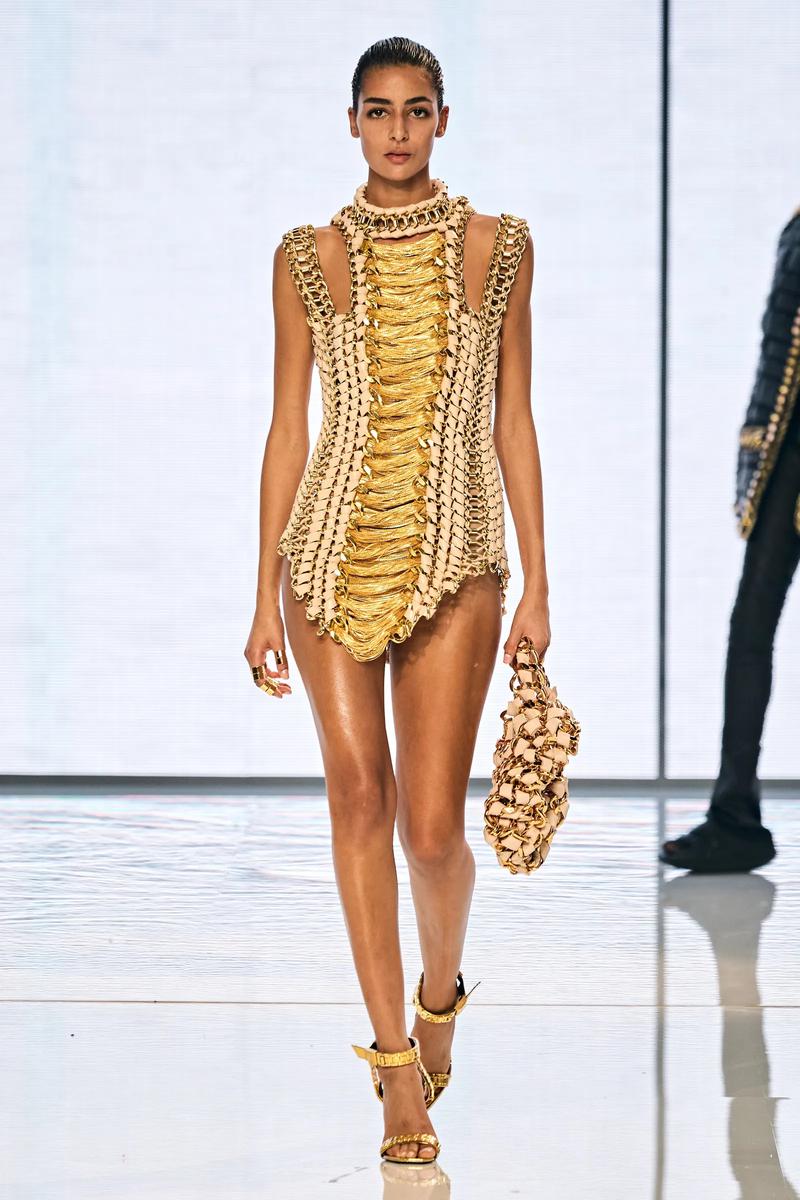 A venerable Parisian house created in post-war France, Balmain has been, since 2011 and the arrival of Olivier Rousteing at its head, one of the most modern brands of the time. A look back at the history of the luxury brand.

Balmain is always on the initiative of daring collaborations. The latest? With the most famous doll on Earth.

Barbie x Balmain, a unisex collaboration with an NFT backdrop

It's nothing new, Barbie® loves fashion. For her 50th birthday in 2009, the greatest fashion designers had created a tailor-made wardrobe for her. Karl Lagerfeld, Sonia Rykiel, Léonard or even Maison Martin Margiela had thus reinvented the outfit of the most famous doll in the world. In 2022, the Parisian label Balmain will become her favorite shopping address. To announce the news, Olivier Rousteing, the brand's artistic director, used one of his favorite medium, Instagram.

"I'm thrilled to announce our new Balmain x Barbie® collaboration. It's a dream come true, ever since I was a kid I've always loved Barbie and feel so proud to be part of Barbie World," said he commented on his post. On the Barbie® Instagram account, we learn more about the NFT aspect of this partnership: "Combining the physical and digital worlds in a unique way, this collaboration will introduce three exclusive NTFs, each with a Barbie x Balmain collector available at auction on the NFT.MattelCreations.com site starting January 11. Or how to return to childhood in style.

In all, this collaboration includes 70 pieces available since January 13, 2022 on the brand's website and in around fifty multi-brand stores at prices ranging from 195 euros to 29,990 euros. The creations, mostly pink, take up the stylistic codes of Balmain: the labyrinth print, the shoulder pads, the signature it bags... All embellished with the Barbie® logo resuming the name of the French luxury brand in its characteristic font. Welcome to the Barbie World...

What is the history of the Balmain house?

Balmain was born in 1945 when Pierre Balmain, a former workshop of couturier Lucien Lelong, decided to found his own house. This native of Saint-Jean de Maurienne, where he was born in 1914, was then 31 years old. He has lived in Paris since 1933, when he arrived in the capital to study architecture.

The first Balmain boutique opened its doors just after the Liberation, therefore, rue François Ier in the 8th arrondissement of Paris and the inaugural fashion show took place in October 1945. Pierre Balmain's style? Volumes studied for elegant and slightly casual pieces. Its range of colors remains classic: black, of course, with a few touches of green, brown, red and parma. Ahead of his time, the designer launched his first perfume, Élysée 64/83 in 1946, then Vent Vert in 1947 and Jolie Madame in 1949. The latter was so successful that the couturier paid homage to it by naming his collection of 1952. Rather focused on couture, he launched into ready-to-wear with a Florilège line that gave pride of place to the new French style. Modern, it sublimates the body of women by highlighting the shoulders, emphasizing the chest and marking the waist. In 1953, Karl Lagerfeld joined the house, as an assistant; he left Balmain in 1962.

What made Balmain so successful?

It was not until the end of the 1950s that Balmain achieved unparalleled success abroad. The couturier was then solicited by the crowned heads of Europe and elsewhere, such as the queens of Belgium, Denmark or Thailand, but also some of the greatest actresses of the time - Audrey Hepburn, Marlène Dietrich or even Sophia Loren, to name but a few.

In 1960, the designer sold the worldwide rights to manufacture and distribute Balmain perfumes to the American cosmetics company Revlon before selling his ready-to-wear house to Léo Gros, a knitwear specialist, in 1977. In 1982 , the luxury brand is re-entering the world of ready-to-wear with Peggy Huynh Kinh at the head of women's collections; the line will be called Ivoire. The same year, Pierre Balmain, the house's iconic designer, died. His right-hand man, Erik Mortensen, takes over the reins of the brand. But, for lack of success, he was replaced in 1990 by Hervé Pierre. A change of creator that is not enough. The real shift took place in 1992, with the arrival of Oscar de la Renta, who breathed new life into Balmain. He left his post in 2002. For several years, a series of artistic directors followed one another: Laurent Mercier, Christophe Lebourg, then Christophe Decarnin, formerly of Paco Rabanne. The latter takes the side of revisiting the classics of the house that once made it successful. The Balmain woman is then modern, glamorous and slightly rock.

How did Olivier Rousteing turn the house upside down?

Christophe Decarnin was replaced in 2011 by Olivier Rousteing, until then head of Balmain's design studio for women's ready-to-wear collections. Aged just 25, he will transform the classic image of the house, in particular by chaining collaborations: with H&M or Nike Lab for whom he creates hoodies, sneakers and other sportswear pieces (a partnership that will go even further in 2021, with the creation of a T-shirt for PSG). In 2016, the house was bought by Mayhoola for Investments LLC, a Qatari investment company that already owned Valentino. Three years later, Balmain made its return (after a sixteen-year absence) to the Haute Couture calendar.

Today, under the impetus of Olivier Rousteing, the house led by Jean-Jacques Guével since 2019 develops men's, women's and children's lines and offers a varied range of flashy pieces: jeans, shoes, T-shirts -shirts, watches, bags, glasses, dresses, blazers, but also perfumes (like Miss Balmain). The prolific designer celebrated, in 2021, his 10 years at the head of Balmain with a spectacular event, between parade and festival. Long live Balmain!

Barbie x BalmainHistorySuccessOlivier RousteingBalmain is always on the initiative of daring collaborations. The latest? With the most famous doll on Earth. Barbie x Balmain,...

I manage my push subscriptions