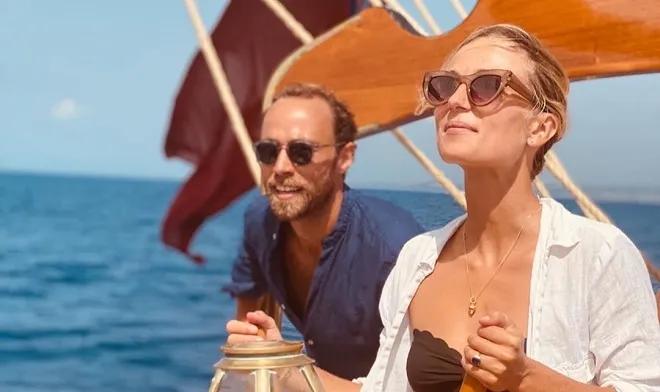 James Middleton, Kate Middleton's brother, married France last September.A union celebrated in the intimacy of the village of Bormes-les-Mimosas, in the Var.A place of ceremony not surprising since his partner is French.Alizée Thévenet met James Middleton in London in 2018.She has been a financial analyst in the English capital for six years when she crosses paths with the brother of the Duchess of Cambridge.During their meeting, she has no idea of the young man's identity, but stops to caress her dog.The beginning of a beautiful story.Very integrated in her in-laws, James Middleton's wife wore Carole Middleton's wedding dress for her wedding.

The first months of the groom

« Mr & Mme Middleton.Yesterday, I married the love of my life surrounded by our family, friends and of course a few dogs in the beautiful village of Bormes-les-Mimosas.Words cannot describe how happy I am, ”wrote Prince William's brother-in-law on Instagram, that day.Since then, it seems that the businessman is always so fulfilled.Back on the social network after a long absence, he wanted to give news to his subscribers.This November 4, he posted a photo of him and one of his dogs, as usual.In legend, he writes: "I'm back!I was so busy kissing these first months of marriage and enjoying being with my wife, that I realize that I intentionally took a digital detox.»Disconnected and far from everything, the lovers enjoyed the beginning of their marriage as it should be.